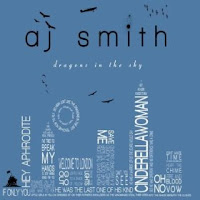 New York based singer-songwriter AJ Smith is on the up. In 2012 he was named the Songwriters Hall of Fame and NYU Steinhardt Songwriting Scholar of the Year. In the same year he opened for The Eagles at the Beacon Theatre and The Washington Square News named him the Most Influential Student at NYU. “Dragons In The Sky” is his debut release, a seven-track EP that showcases both his range and his ear for a pop song.

Recorded in a full band setting, “Dragons In The Sky” is a well-rounded collection with a few unexpected twists and turns. The first surprise comes on track one, which swings and struts like a Scissor Sisters cut, with Smith effortlessly hitting the high notes on the chorus. It brings a smile to the face and gets the feet involuntarily stirring – both good things. “Aphrodite” moves just as convincingly, and Smith’s clever wordplay is underpinned by needle-sharp guitar and a rhythm section obviously enjoying itself.

The record’s more introspective passages are equally impressive, and the pairing of “Kings and Crowns” and “If Only You” providing the prime example. The former builds to a thrilling conclusion, with a piano adding colour and depth, and the latter is probably Smith’s finest vocal, and indicates a talent for Coldplay-esque ballads, with added quirkiness.
www.facebook.com/ajsmithmusic
www.reverbnation.com/ajsmithmusic
AJ Smith CD Baby Page
Phil S.