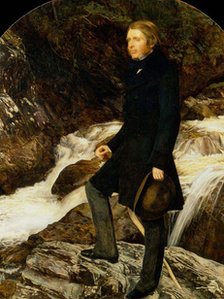 A celebrated Pre-Raphaelite painting that led to the marriage breakdown of its famous Victorian sitter has been acquired by an Oxford museum.

The portrait of art critic and poet John Ruskin by John Everett Millais has been allocated to the Ashmolean.

Ruskin and Millais were friends but the painter fell in love with Ruskin's wife when he began the portrait in 1853.

The museum said it was "one of the most important Pre-Raphaelite paintings" that had remained in private ownership.

The portrait was started during a group holiday in Glen Finglas, a remote area of The Trossachs, north of Glasgow.

A museum spokesman said: "It was during this holiday that Millais fell in love with Effie Ruskin, setting in motion the events which would break the Ruskins' marriage."

According to the museum Millais had declared finishing the picture had become "the most hateful task I have ever had to perform".

The Ruskins' marriage was annulled in July 1854 and a year later Millais married Effie.

In 1871, Ruskin gave the portrait to his friend Henry Wentworth Acland.

It hung in his house in Oxford and remained in the family until sold by his descendants at Christie's in 1965, when it was bought by the late owner.

He added: "The portrait is of supreme importance for the study of 19th Century British art and it will be shown with the museum's world-renowned Pre-Raphaelite collection."

The picture has been on loan to the Ashmolean since January 2012 but was allocated to the museum by Arts Council England under the Acceptance in Lieu of Inheritance scheme.

Born in 1829, Millais was a pioneering British painter
A child prodigy, at 11 he was the youngest ever student to enter the prestigious Royal Academy Schools
He met William Holman Hunt and Dante Gabriel Rossetti here, and formed the Pre-Raphaelites
They rejected High Renaissance artists such as Raphael, preferring earlier artists like Botticelli
Millais' most famous works include Christ In The House Of His Parents, The Princes In The Tower, and Ophelia