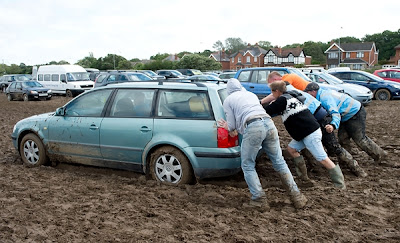 Changes have been made to the Isle of Wight Festival's access routes and car parking in a bid to avoid a repeat of last year's traffic chaos.

Promoter John Giddings has pledged double the amount of parking spaces, as well as asphalt entrances to the Seaclose Park site in Newport.

He said what happened last year would "never happen again".

Mr Giddings added there would also be separate festival traffic routes on the island this year.

"What happened last year was we had a month's worth of rain in 24 hours and the car parks just became inaccessible - that will never happen again," he said.

Traffic queues at the site last year also meant ferries became stranded in the Solent because they were unable to unload any more vehicles on to the island.

Queues of cars stretched to the ferry port at Fishbourne and many people were forced to spend the night in their cars.

Acts performing at this year's festival, which runs from 13 to 16 June, include Paul Weller, Emeli Sande, Jake Bugg, and Blondie.