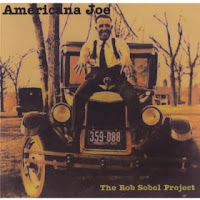 I don’t know too much about Rob Sobol, and I think that’s probably the point. “Americana Joe” is a concept album, with old school country-rock and blues influences at play, and a titular character that dominates our attention; in other words, it’s Joe’s world were entering, and the rest of us, including Rob Sobol, are mere observers. It’s a clever notion, and one that works brilliantly well on an album that revels in storytelling. Each song unveils a new chapter in Joe’s life and if it was a book, I’d be describing it as a “pageturner”.

Sobol tells his tales in a style that alternates between ‘70s outlaw country, contemporary alternative country and something that’s evolved naturally from the first couple of Band records. Opening cut “Whiskey and Cigarettes” is fabulously weathered, and sounds not unlike Handsome Family’s Brett Sparks fronting Tarnation. The album’s course is altered immediately on “Goodbye Sally”, its shuffling rhythm adding something altogether different, and “Fly Away” is a rough and ready rocker, which brings to mind Bob Seger, circa “Stranger In Town” - and when performed live, will inevitably result in a few fists being punched skyward. As with all concept records, it’s probably best to listen in one sitting, though just about every song on “Americana Joe” can be enjoyed individually. Great idea, great album.
www.youtube.com/Rob-Sobol-Project
The Rob Sobol Project CD Baby Page
Phil S.