Review: Save The Arcadian – How’d They Get Up There?

Save The Arcadian – How’d They Get Up There? (Independent) 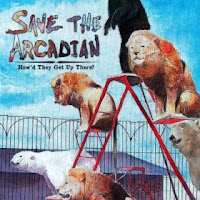 Save The Arcadian got together in 2011, when students Will McCarry (vocals and guitar) and Sam Rodgers (guitar, mandolin, vocals) met pianist Russell Michelson at university. They next recruited cellist Jake Dellinger, and were then joined by drummer Bryan Chase. Their debut album “How’d They Get Up There?” was recorded in their dorm, on a single microphone during their senior year.

Gigging and practice have certainly refined their songwriting talents, as “How’d They Get Up There?” is crammed full of tight, three-minute(ish) indie-folk-pop songs, the sort of songs you find yourself inadvertently singing-a-long to at inopportune moments - on public transport, in crowded lifts, etc. There’s a youthful enthusiasm running through the ten tracks, which is impossible to ignore, and harder still not to be swept along by.

They begin the record with a short introductory song. At just over a minute’s duration “On Parade” is too brief to really come to terms with, yet it contains many of the group’s finer attributes; a fine (if short) song, an arrangement that builds beautifully and a certain naivety that borders on innocence. The following “I Won't Call” is sincere and bittersweet, with a feisty choir of massed voices adding much to the song’s final third. Perhaps the star track is “Walrus”; its combination of piano and guitar brings to mind both a John Barry soundtrack and late-period Beatles. Radio’s going to love it.
www.facebook.com/SaveTheArcadian
www.savethearcadian.com
Save The Arcadian CD Baby Page
Phil S.