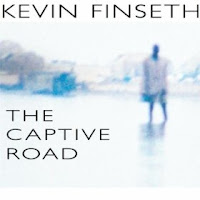 Kevin Finseth has been involved with music making for a number of years, though it’s not easy to find recordings. On his website he mentions a 2004 solo album entitled “The Return” and another “Gun Crazy” from 1999 credited to a group called The Bedouins, and that’s it. Good luck with finding them – I’ve not. Which is a shame, because having lived with “The Captive Road” for a few days, I’d like to hear some more.

Mostly recorded in Vancouver from May 2010 to April 2011, “The Captive Road” has been described by Finseth as “ambient folk hymns, opium jazz, experimental gospel”, which certainly whets the appetite. Those with less esoteric filing systems may wish to make a space next to their early Devendra Banhart and Joanna Newsom records.

Finseth sings his songs with a voice that’s delicate and feathery, though lyrically he’s rock solid with a keen sense of time and place, though the four instrumental tracks he presents, “The Reader”, “Cairo April 1983”, “The Passenger” and “Sketches of Haney” are standout pieces. In particular, “Cairo April 1983” is simply spellbinding, and has the power to transport the listener to the bustling Egyptian capital in much the same way as Anne Dudley and Jaz Coleman’s “Songs From The Victorious City”.

Frazey Ford (Be Good Tanyas) sings harmony vocals on the opening two cuts “Fall Away” and “Time's a Train”; the former is just pristine, with cellist Peggy Lee filling the spaces, and the latter sees Ford matching Finseth’s fragile tone with sustained vocal notes. The result is sublime and quite beautiful – as is much of the album, and if any of the above piques your curiosity, I can only suggest you investigate without further ado.
www.kevinfinseth.highlifeworld.com
Kevin Finseth CD Baby Page
Phil S.