Review: The Skys – Colours of the Desert

The Skys – Colours of the Desert (Matchbox Recordings) 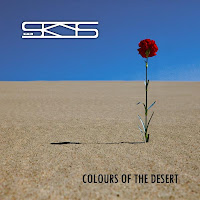 Previously hailed as “Lithuania’s No.1 proggers” by Kerrang! founder, Geoff Barton, The Skys have a lot to live up to on their fourth full length album, “Colours of the Desert”. Taking sand as their central concept, The Skys score the world’s rise from the desert (“Is This the Way?”), the loneliness of the desert (“Walking Alone”), desert dwellers (“Lethal Kiss” and “The Pyramid”), the sands of time (title track), draw in biblical reference (“I…He…”), and imply that nuclear war would result in the world returning to such a barren place (“When The Western Wind Blows”).