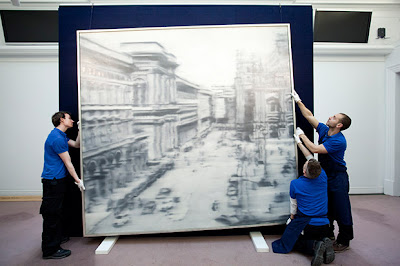 A 1968 oil painting by German artist Gerhard Richter has set a new record in New York for the highest auction price achieved by a work by a living artist.

Tobias Meyer of Sotheby's called the price "a major accomplishment".

Richter, 81, also held the previous record for the top price fetched at auction by a living artist.

Sotheby's described Domplatz, Mailand, which depicts a cityscape painted in a style that suggests a blurred photograph, as a "masterpiece of 20th Century art" and the "epitome" of the artist's 1960s photo-painting canon.

Onement VI, a 1953 work by abstract expressionist painter Barnett Newman's Onement VI, set a new record for the US artist after selling for $43.8m (£28.7m).

A Francis Bacon work that had been estimated to sell for as much as $40m (£26.2m) failed to attract a buyer.