Review: Thee Spivs – The Crowds and the Sounds

Thee Spivs – The Crowds and the Sounds (Damaged Goods) 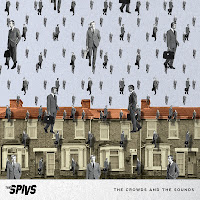 Eleven tracks in 31 minutes, Thee Spivs don’t hang around, which is only right and proper, as they’re a punk band at heart, even if much of their sound owes a debt to pub rock outfits like Eddie and the Hot Rods and Count Bishops.

Previous records (“The Crowds and the Sounds” is their third long-player) have drawn praise from big-hitters such as Mojo, BBC, Paul Lester at The Guardian and Stewart Lee at The Sunday Times, so it’s perhaps surprising that they’ve yet to do the business, audience and sales wise. Still, they’re hardly cutting edge, envelopes are not being pushed and barriers have remained resolutely unbroken down. A cult following probably beckons - which is no bad thing, at all.

They kick things off with “Social Network”, and although I’m generally anti songs about modern technological phenomena, here they get away with it thanks to their “On the social… network” refrain, which makes it sound almost dole related - and that’s as it should be. “Forget It” is better, it’s power pop roots exposed by some enthusiastic backing “ooh oohs” and both the title track and “Lets Talk About The Weather” will get elderly Dan Treacy fans sobbing nostalgically into their bitter shandys.
www.theespivs.blogspot.co.uk
www.facebook.com/theespivs
www.damagedgoods.co.uk/Thee-Spivs
Rob F.
Posted by Bangs at 5/16/2013 02:40:00 pm