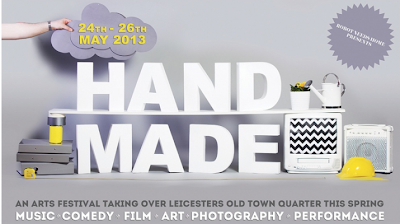 Handmade Festival, a music and arts festival taking place at venues across Leicester city centre, can now confirm the full line-up for this year's first event.

Taking place from Friday 24th to Sunday 26th May, the festival will feature the likes of Dutch Uncles, Rolo Tomassi, The Twilight Sad, Tall Ships, Nine Black Alps, Maybeshewill, Sam Duckworth, Sky Larkin, Arcane Roots, Johnny Foreigner, We Were Promised Jetpacks and Her Name Is Calla among many other bands as well as comedy, a pop-up cinema (based in a fifteenth century merchants dwelling) and art and photography exhibitions, taking over not just Leicester city centre's established music venues but also reclaimed spaces such as the 14th century Guildhall, a Methodist Church and Leicester Castle.

Weekend tickets are now on sale priced £25 with day tickets available for just £10 each from http://handmadefestival.co.uk. There is also a special after party event on Bank Holiday Monday 27th May which is ticketed separately, also £10.

The line-up is as follows:

Full schedule details, including venue age restrictions and stage times, are at http://handmadefestival.co.uk/schedule/