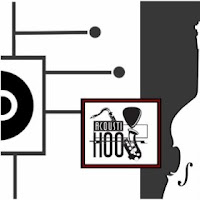 Wisconsin four-piece AcoustiHOO (Sue Orfield on saxophone, Lucas Fischer plays guitar and sings, Olaf Lind contributes violin and mandolin and Randy Sinz holds the rhythm together on double bass and sings, too) play a mix of old-school jazz, blues, Klezmer and Americana on their new, self-titled debut record. They’ve been performing together since 2010, playing both covers and original material.

They’ve a talent for both joyous dance music and melancholy material, and it’s the latter that launches the record; “I Can't Shake This Sadness” is beautifully languid, with Orfield’s saxophone leading the way. By contrast, their take on the ‘20s jazz standard “Sweet Georgia Brown” will surely get the most leaden of feet moving and back-ends a-shaking – if you get my drift.

The gentle “Lullaby” relies on Fischer’s acoustic guitar for mellow propulsion and on “Two Fifteen” the combination of Lind’s violin and Orfield’s saxophone is beautifully unhurried. “5am Blues” is perhaps their most conventional song – it’s folk-rock influences and jazz flourishes bring to mind the West Coast boho scene of the early to mid ‘70s, and artists like Tom Waits and Rickie Lee Jones.

In and around her Chippewa Valley hometown, Orfield is a musician of some repute, and has played with a diverse range of talents, from Bo Diddley and Dizzy Gillespie to Ivan Neville and the Indigo Girls. Although AcoustiHOO aren’t quite as prominent as those artists, these eleven recordings will only add to her reputation.
www.facebook.com/AcoustiHOO
AcoustiHOO CD Baby Page
Tony S.