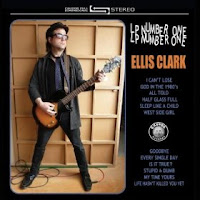 Ellis Clark has been a fixture on the Chicago music scene since the late ‘70s, as a founding member of Epicycle (if you get the chance, check out their “Special First Edition” album from 1981), later with the band Social Act, and finally with The Handcuffs. He’s also produced a number of artists and groups over the years, from June and the Exit Wounds, to Kevin Tihista and local power pop legend Phil Angotti. “LP Number One” is his debut solo album - which can be no surprise, given its title.

A quick perusal of his discography, as both musician and studio hand, suggests an artist inclined to strong tunes and plentiful hooks, and this twelve-track collection does everything necessary to confirm those suspicions. Of course, Chicago has had a reputation for classic guitar pop acts, probably since the Beatles passed through in ’64, and Clark has more than played his part. Here he showcases his all-round talents as a writer, musician and producer, with an album that oozes confidence and a song selection that should impress the most jaded of pop fan.

Aided and abetted by some of the cream of the Chicago pop underground, including Brad Elvis (The Romantics, The Handcuffs), Yvonne Bruner and the fore mentioned Angotti, Clark has constructed a collection of instantly engaging, melodic, catchy songs. “I Can't Lose” is a Lloyd Cole-esque ballad with a stylish arrangement and super blend of keyboards and voices. “God in the 1980's” gets to grips with the decade in question rather than any particular deity, though Carla Prather’s backing vocal contains a certain gospel clarity. “Goodbye” is pure ‘70s FM pop – the good stuff – and the album is brought to a conclusion with the fate tempting “Life Hasn't Killed You Yet”. Its thoughtful and meditative tones providing a solicitous au revoir.
www.ellisclark.com
www.reverbnation.com/ellisclark
Ellis Clark CD Baby Page
Phil S.