Review: Humphrey–McKeown – On My Way Home 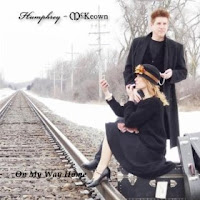 Humphrey–McKeown is the singer-songwriter duo of Heather Humphrey and Tom McKeown. Both artists are multi-instrumentalists and they’ve been performing together since 2006. Humphrey is a first-rate vocalist with roots in musical theatre, and McKeown played in hard rock band Haze and prog-rockers Damascus, as well as obtaining a wealth of studio experience as a session musician and singer.

It’s an interesting blend of sounds and styles, and it’s to their credit that not only do they pull it off, they actually combine to do something new and quite intriguing. They set out their stall straight away with “Oh, What Kind of Love”; McKeown’s acoustic guitar is perfectly weighted, driving the song along (within a full band setting), whilst simultaneously leaving lots of room for the song. For the most part they sing in sync, and both have distinctive styles that come together beautifully, Equally, when one or the other takes lead, they’re just as imposing.

At nearly an hour, it’s a lengthy album, but one that’s easy to live with. Great tunes appear to come naturally to them, and their songs invariably come loaded with plentiful hooks and the kind of choruses that stick around. There’s variety too, from the classic folk-rock of “Chandler's Crossing”, the retro Brill Building poptones of “Page One” to the timeless country picking that underpins “A Misfit”. Yet, thanks to their excellent vocals, the album remains resolutely and consistently their own, and does all that’s required to potentially earn a considerable audience and much radio play. Fingers crossed it happens for them.
www.hm-music.com
www.facebook.com/HumphreyMcKeown
Humphrey-McKeown CD Baby Page
Phil S.