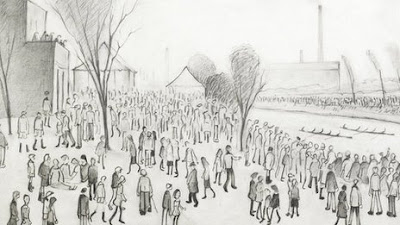 A collection of paintings and drawings by LS Lowry has fetched almost £600,000 at auction in London.

Many of Lowry's pictures depict Salford and the surrounding areas where he lived for more than 40 years.

One of the auction highlights was a drawing of the Agecroft Regatta (above), held on the River Irwell at Kersal Cell in 1948, which sold for £211,250

Also in the sale at Bonhams was a painting by David Hockney, which fetched £97,250.

Hockney was born in Bradford in 1937 and as a teenager would use a pram loaded with paints and brushes as a mobile art studio on the city streets.

He went on to find fame at the Royal College of Art in London in the 1960s.

Lowry was born in Stretford, Manchester, in 1887 and worked full-time at the Pall Mall Property Company, even when he was one of the most popular painters in Britain.

He is particularly recognised for his trademark matchstick men represented in desolate industrial and urban landscapes.

In 1953, he was appointed an official artist at the Queen's coronation.