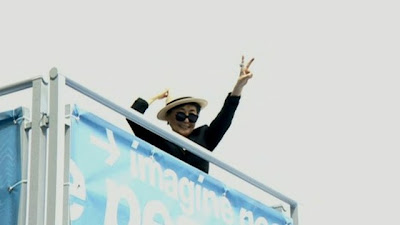 Yoko Ono has visited Liverpool to launch a bus which will tour Europe and be used by young people to make music.

John Lennon's widow unveiled the bus at the Museum of Liverpool before it sets out for London and the rest of Europe.

Young people will be able to take part in workshops and produce music, video and photography projects inside the bus's recording studios.

She said: "Music is so important for everybody on this planet, I think it is the one thing that is keeping me young.

"Whenever I hear a drum beat my body starts to move, there's nothing I can do about it." 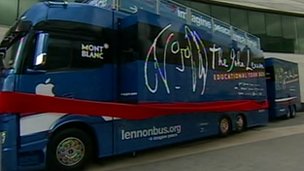 She added John would be "very satisfied" with the project.

The launch of a European bus follows a similar project launched in the USA 16 years ago.

The bus is staffed by a crew of three and visits schools, colleges and festivals providing free workshops for young people.

The bus will move on to the Southbank Centre in London during this year's Meltdown Festival on 14-23 June, which is curated by Ms Ono.