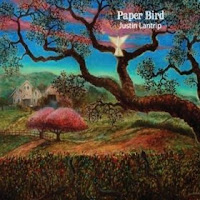 Justin Lantrip is making waves in his hometown of Sandpoint, Idaho, and “Paper Bird” should see him broadening his fanbase considerably - perhaps even finding an international audience. This is his third album (“I Am My Will” was released in 2010 and “Bleed Then Bloom” in 2012), and he barely puts a foot wrong. He’s a singer-songwriter at heart, and the production and arrangements on “Paper Bird” place his voice and songs, front and centre. His soulful tone does much to separate him from the pack, and his musicianship and studio nous – he recorded the album himself - plays to all his strengths.

It’s a collection that suits nighttime listening. The recording is warm and inviting, and you’ll want to sit, concentrate and listen to its drama unfold, glass in hand, rather than hear it through a miasma of daytime distractions. For the most part “Paper Bird” is ruminative and thought provoking; it’s imagery sharp and Lantrip’s conclusions oblique. Repeated spins reveal a multitude of musical layers, from keyboards to strings, and his songs, whether upbeat and spirited like opener “Razor Blue”, “Who Was I” and the nigh on perfect “Kentucky Sore” (with added violin and complimentary backing vocals), or downbeat and desperate like the title track and “Blue Chagrin”, are both emotionally flayed and faultlessly executed.
www.justinlantrip.com
www.facebook.com/justinlantripmusic
www.justinlantrip.bandcamp.com/paper-bird
Justin Lantrip CD Baby Page
Phil S.