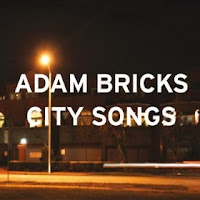 Adam Bricks earned his songwriting spurs in New York as part of the city’s anti-folk scene, a loose confederation of songwriters keen to distance themselves from the nostalgia that surrounded Greenwich Village and the ‘60s folk revival. He released a series of demo recordings and gigged relentlessly, and garnered much attention for his efforts. He’s since returned to his hometown of Houston, Texas, where he’s put a band together, and it’s those musicians (Bricks writing the songs, playing guitar and singing, James Essary on guitar and piano, Matt "The Kid" Willhelm on bass and drummer Ryan Chavez) who feature on “City Songs”.

There’s an urbanism to Bricks’ writing, which explains the album’s title. His songs reflect city life, not all of it pretty, and some of it, downright strange, but the group retain a rootsy edge to their presentation, which makes “City Songs” both eminently accessible to alt. country fans, while the disparity lends the collection an air of indie credibility. It’s earned them comparisons to Dylan, Lou Reed and Silver Jews, which surely won’t hinder their progress. Fortunately the comparisons are merited - Bricks is a talented writer, with the ability to get inside his subject matter and draw the listener’s attention to the quirks and twists that make life interesting, and he’s got an ear for a tune, too.

Standout songs come thick and fast; “Day At the Park” is chock full of imagery and observations, and if the story’s oblique, it hardly matters. “A Dog” chugs along in fine style, with Bricks recounting his sprawling tale, which may or may not be canine related, and the band finds a particularly toothsome groove. “Colorado Bar” mines much the same vein, with Bricks delivering one of his best vocals, and they bring proceedings to a close with “Kristmas”, a festive missive with all the cheer of Tom Waits’ “Christmas Card From a Hooker in Minneapolis” – and it’s almost as good.
www.facebook.com/AdamBricksMusic
www.adambricks.bandcamp.com
Adam Bricks CD Baby Page
Phil S.