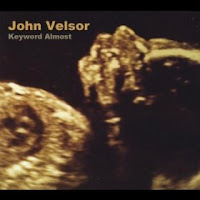 The list of John Velsor’s influences is both long and wide-ranging, from punk, indie and folk to Debussy and the Velvet Underground. His new album “Keyword Almost” reflects his broad tastes, and he incorporates them into his sound, but without compromising his own musical identity. Indeed, there’s an easy melodic flow to be found throughout the album, which suggests that, although Velsor absorbs various genres as a fan, he’s single-minded when it comes to his own output, with his songs providing the basis of his style.

He defines his music as folk-rock, and that’s about right, though it’s a particularly energetic version. In his home city of New York, Velsor’s a regular live attraction, both solo and with his band, and most of them appear on the album. It begins with one of his best songs “It Just Stopped Raining”. Its ‘60s feel and solid hooks bring to mind both original Brit-invasion artists like The Hollies, but also ‘70s retro power popsters such as Greg Kihn and The Rubinoos. There’s a hard, rocking edge to a few of his songs, especially “Time to Go”, its chopping rhythm contrasting nicely with Velsor’s vocal, and a dirty, brilliant guitar solo also features.
www.johnvelsor.com
www.facebook.com/johnvelsorsounds
www.johnvelsor.bandcamp.com
John Velsor CD Baby Page
Phil S.