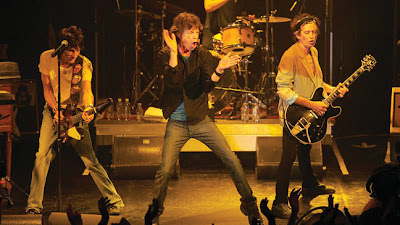 The BBC has said it is having "ongoing conversations" with the Rolling Stones over how much of their Glastonbury performance can be broadcast on TV.

Press reports suggested the band had refused to let their full set be aired.

"Discussions with artists are business as usual for this stage of our festival planning," a BBC spokesperson said.

Speaking to The Independent, the BBC's head of music television Mark Cooper said the rock legends were "nervous about how much they should share".

The Stones, he told the paper, were "stepping out of their comfort zone". He added: "At this point, I'm quite optimistic we'll get a sufficient amount of music."

The BBC statement said: "We're confident that we'll be able to deliver fantastic coverage of this year's amazing Glastonbury line-up."

The Rolling Stones' spokesman declined to comment. The veteran rockers, he said, chose to remain "tight-lipped" on the subject.

It is not unusual for negotiations about TV coverage to continue right up to the festival.

Bruce Springsteen initially requested less airtime than was eventually agreed upon, and it is understood that conversations about Beyonce's performance in 2011 continued to the wire.

The Rolling Stones will play on the festival's main Pyramid Stage on Saturday 29 June. Mumford and Sons and the Arctic Monkeys are the other headline acts at this year's event at Worthy Farm, Somerset.

On Thursday, the BBC said there would be 250 hours of live broadcasting from Glastonbury's six main stages.