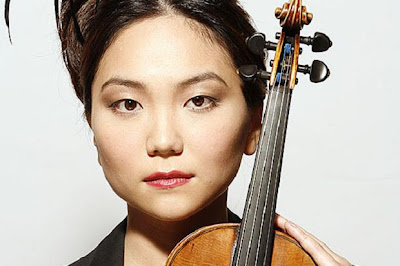 A violinist says she has "an incredible feeling of elation" after her stolen 300-year-old violin was recovered.

The £1.2m Stradivarius violin was taken from Min-Jin Kym more than two years ago when she was in a sandwich shop near Euston Station in north London.

British Transport Police said the instrument had been recovered from a property in the Midlands last week.
It was intact with some very minor damage, police said.

She said: "Every moment of the day - even when I was sleeping - the loss of the instrument, the feeling of responsibility, was there.

"This had been the instrument I had been playing on since I was a teenager so it was a huge part of my identity for many years.

"Obviously it was devastating."

She added that she now felt "an incredible feeling of elation".

"I'm still feeling the butterflies in my stomach," she said.

The 2010 theft featured in a BBC Crimewatch appeal and a man and two teenagers were convicted in 2011.

Police had thought a violin recovered in Bulgaria in March could have been the missing instrument, but an expert said it was a replica.

He said: "I always maintained that its [the violin's] rarity and distinctiveness would make any attempt to sell it extremely difficult, if not futile, because established arts and antiques dealers would easily recognise it as stolen property."

The violin has been returned to Lark Insurance Broking Group which paid out after the theft but discussions are under way for it to be returned to Ms Kym soon, said a police spokesman.

He said he could not be specific about where the violin was found because how it came to be moved from London to the Midlands was the subject of a separate police investigation.

Antonio Stradivari - maker of the world-famous violins - was born in 1644 and died in Cremona, Italy, in 1737
He made over 1,000 violins, violas and violoncellos, and was commissioned by royalty throughout Europe
Golden period considered to be from 1700-1725
It is believed that around 650 of the instruments have survived
His most famous violins include the 1715 Lipinski and the 1716 Messiah

What makes the Strad so special?