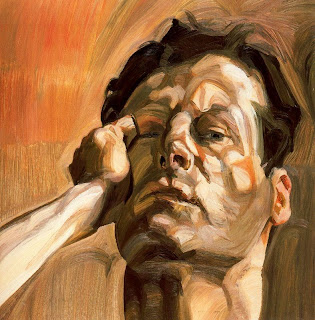 Paintings by artists from William Hogarth to David Hockney have been chosen to go on billboards as part of a nationwide open-air art exhibition.

Fifty-seven works have been selected through a public vote to appear on 22,000 billboards, bus stops and other sites as part of Art Everywhere.

The Lady of Shalott by Victorian artist John William Waterhouse was the most popular choice in the online vote.

The posters will be on display across the country between 12-25 August.

Art Everywhere founder Richard Reed said 90% of the population was likely to see the posters.

"If we can't get the average guy in the street to go into a gallery, maybe we can get the art from the gallery into the street," he said.

"I'm firstly hoping that some of it's going to get noticed. And then secondly I'm hoping it's going to bring a bit of a lift or a smile to people.

"Art is something that can give me a jolt of adrenalin or inspiration for a thought or just put a smile on my face for the day.

"And there's a more serious purpose, which is that, as a country, we have this incredible creative talent. I want this exhibition to celebrate the fact that the UK is the home of brilliant art."

Mr Reed said the advertising industry had donated poster sites, with other costs met by Tate, The Art Fund and a public funding campaign. The campaign has so far raised £133,000 of its £200,000 target.

Pre-Raphaelites took the top two spots in the public vote. Waterhouse's The Lady of Shalott illustrates a passage from Alfred, Lord Tennyson's poem of the same name. That was followed by Sir John Everett Millais' Ophelia.

The only living artist in the top 10 is Cornelia Parker for an image of her 1991 installation Cold Dark Matter: An Exploded View.

She enlisted the British Army to blow up a garden shed, then reassembled the fragments to create a three dimensional snapshot of the explosion frozen in time.

Parker said the Art Everywhere project was the "best kind of public art".

"The billboard is so democratic, and it's for everyone, and it's usually just there to sell stuff," she said.

"So I like the idea that this is something for people to look at. They don't have to buy it, they can just look at it and experience it. It will be seen by lots of people who would never normally go to a museum as well, which I like."