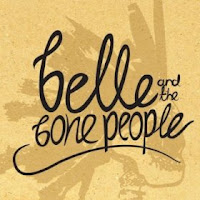 Belle and the Bone People are a five-piece folk-rock band that have earned a considerable reputation for themselves in their home city of Sydney, Australia, thanks to lively, high energy live performances, where they’re usually joined by a horn section, and supplementary instruments. They released a single “The Light” last year, but this collection, a self-titled six-track EP, will provide the first real opportunity for an international audience to hear them - and it makes for a fine introduction.

With an average age of just 20, there’s a youthful enthusiasm running throughout the recording that’s incredibly endearing and wholly infectious. On their various websites, they confirm a host of influences including Dixieland jazz, funk and blues, and they integrate those genres and styles into their vibrant folk based songs, allowing for plenty of variety within their own well-defined sound. Folk-rock and acoustic music is riding high at the moment, thanks to the success of artists like Mumford & Sons and Fleet Foxes, and with the right exposure and a bit of luck, Belle and the Bone People could well breakthrough to a larger audience. They’re doing just about everything right.

Vocalist Isabella Kearney-Nurse sings out with passion and we hear that zeal for the first time on “The Boy”, which also finds her Bone People in rip-roaring form, especially guitarist Hamish Reid who propels the song onwards and upwards with fervent strumming. The slower, darker “Johnny” shows an altogether more ominous side to their sound, and brings to mind both contemporary British folk acts like The Unthanks, together with American groups like Paula Frazer’s Tarnation and Mazzy Star. They finish with “To the River”, which is probably Kearney-Nurse’s best vocal of an impressive bunch, and works perfectly with the song’s jazz-flecked, folk-rock arrangement.
www.belleandthebonepeople.com
www.facebook.com/BelleandTheBonePeople
www.belleandthebonepeople.bandcamp.com
Belle and the Bone People CD Baby Page
Phil S.