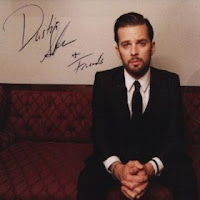 As the frontman and key songwriter in Nashville rock band Overzealous, Dustin Sellers let his classic rock and post-grunge influences come to the fore. With his new solo record his sound’s a little softer and a touch more refined, but without sacrificing either the dynamics of his own performance or the quality of his songwriting. Indeed, it might be altogether reasonable to describe “Dustin Sellers and Friends” as a “singer-songwriter” album, though it’s never quite that easy to define or pin-down, and a multitude of clichés are cleverly avoided.

Though Sellers’ songs are pivotal, he appears equally enamored with creating atmosphere and mood. It’s this attention to aural detail that elevates the album above the throng, and provides the listener with plenty of musical thrills. There’s hardly a track on the album that would sound out of place segued into a grown-up radio playlist and although there’s a consistency of vision running through the collection, Sellers brings a variety of styles to the table.

He begins with “Molly Cool”, a slow, intense number with shades of American Music Club and the resigned heartbreak of “Hats” period Blue Nile. It’s followed by the jaunty upbeat tones of “Too Long” and the whip-smart, trumpet emblazoned power-pop of “Bruiser”, a track that could single-handedly reinvigorate a whole genre. “My Johanna” is a perfect modernizing take on old folk idioms – though over far too quickly - and ending with the desperate loveliness of “Sweets and Sours”, a track that brings us full circle.
www.facebook.com/dustinsellersmusic
www.onesheet.com/dustinsellers
Dustin Sellers CD Baby Page
Phil S.

Learn how to get your music noticed at ReverbNation.com