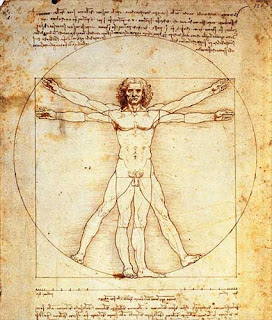 Fifty two drawings by Leonardo da Vinci - including his famous study of the body - have gone on show in Venice.

Leonardo da Vinci: The Universal Man includes the original image of his The Vitruvian Man, which has not been seen in public in 30 years.

The exhibition at the Galleria dell'Academia is a collection of the Renaissance painter's artistic and scientific research.

It also features preparatory drawings for some of da Vinci's famous works.

Curator Annalisa Perissa Torriani said she hoped the show would provide visitors with an insight into the inner workings of the artist's mind.

She said it shows da Vinci "reasoning and translating from his brain to his hand but always retracing his steps to add corrections and additions".

Da Vinci, who was born in 1452, was a polymath whose talents covered painting, sculpting, architecture, mathematics and botany among many others.

The Vitruvian Man was based on the writings of the ancient Roman architect Vitruvius, who correlated the measurements and design of the human body into architecture.

Despite it being among Da Vinci's most famous works, the fact that it is drawn on paper means that it is rarely put on public display over fears of lasting damage.

The exhibition has been made possible with works from the Venice museum's own archives as well as from the collections of the British Royal Family, Oxford's Ashmolean Museum, the British Museum in London and the Louvre in Paris.

The show runs until 1 December.