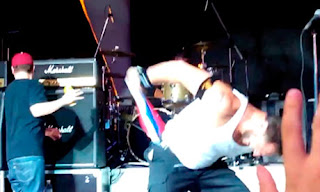 Bloodhound Gang has been banned from a Russian music festival after a band member stuffed the Russian flag into his underpants on stage.

Culture Minister Vladimir Medinsky described the band as "idiots" and said they were "packing their suitcases".

Bass player Jared Hasselhoff was seen in a video pushing the flag into the front of his pants and pulling it out of the back.

The incident took place in a 31 July concert in the Ukrainian city of Odessa.

"Don't tell Putin," Hasselhoff said to applause as he grabbed a Russian flag from the wall behind and performed the stunt.

The band had been expected to play at the Kubana festival, held in the first week in August in Russia's southern Krasnodar region, also known as Kuban.

But their performance billed for Friday was cancelled.

"I spoke to the Krasnodar region authorities. Bloodhound Gang is packing their suitcases," Mr Medinsky said on Twitter.

"These idiots will not perform in Kuban."

Festival organiser Ilya Ostrovsky told gazeta.ru: "We're here to make friends or listen to music. We will not allow anyone to insult the inhabitants of any country."

Local media reports later said that Hasselhoff had been questioned by police.

The head of Russia's Investigations Committee, Vladimir Markin, said his department was prepared to pursue criminal charges against "all those involved" if prosecutors decided there was a case.

The band is still in Russia but has left Anapa, the town where the festival is being held.