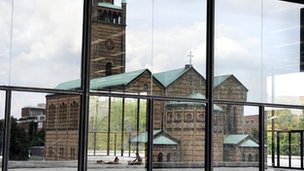 Berlin has given the go ahead to build a new museum to house its 20th Century art, as well as a collection donated by a wealthy couple.

The collection belonging to Ulla and Heiner Pietzsch includes art by Rothko, Dali and Joan Miro, and is valued at some 150m (£96m) euros.

If building work begins next year, the museum it could be open by 2022.

However, the German government, which is paying the cost, needs to approve the funding before construction can start.

The agreement ends a long dispute over an initial plan to move the city's collection of Old Master paintings out of its current home at the Gemaldegalerie and build a new home for it on the Unesco-listed Museum Island to make way for the 20th Century collection.

Berlin's Old Masters collection includes masterpieces by artists from every period between the 13th and 18th Century such as Rembrandt, Caravaggio, Rubens and Gainsborough.

But at an estimated cost of 375m euros (£321m) to build, it sparked controversy when it was announced with two petitions against the move collecting tens of thousands of signatures.

There were also formal protests by art historians who argued that one of Berlin's best-loved art collections would have to be kept in storage and out of public view for years during the upheaval.

"The realisation of the new proposal would boost the attractiveness of the Cultural Forum and keep the costs in a responsible range," he said.

He added the building was needed urgently "not just because of the Pietzsch collection, but because there is no room to exhibit our own 20th Century collection".