Review: Jerry Fiess – Something About Life

Jerry Fiess – Something About Life (Independent) 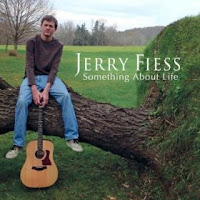 New Jersey based singer-songwriter and multi-instrumentalist Jerry Fiess began playing piano at age six, with instruction and assistance from his grandmother. He still plays piano, but he’s also added guitar and harmonica to his repertoire, and it’s the combination of instruments coupled with his expressive vocals that gives his debut album “Something About Life” a unique musical stamp. Rooted in Americana and the folk tradition, Fiess wouldn’t have sounded wholly out of place had he plying his trade in the coffee shops and bars of ‘60s Greenwich Village, though he modernizes his sound with an easy soulfulness, which of course, is very much the vogue with contemporary songwriters and singers.

He begins with “Down By the River”. The title may not be wholly original, but the song is. There’s a vulnerability and openness to Fiess’ voice, which is tremendously appealing, and his harmonica provides a useful counterpoint and signals links to artists like Neil Young and Bob Dylan. On “Must Be More” he taps into another vibe altogether, thanks to rolling keys and a bar band vibe, and the gentler, more reflective “Work It Out” shows off both his versatility and his talent for laying bare emotions while simultaneously avoiding any suggestion of mawkishness. If I could only choose one track to pester my local radio station to play, it would be “Hard to Be Honest”. Upbeat and catchy, with a spidery electric guitar entwining the vocals, it deserves to be heard by a much wider audience.
www.jerryfiess.com
Jerry Fiess CD Baby Page
Phil S.