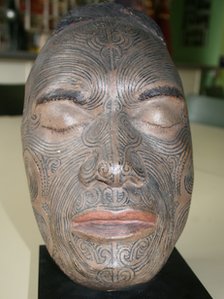 The mummified head of a Maori will be sent back to New Zealand after 170 years in a Cheshire museum.

The severed head of an island chief is being repatriated at the request of a New Zealand museum due to its cultural importance.

It has been kept in Warrington Museum since 1843, though is not displayed in public as it is sacred to the Maori.

New Zealand's Te Papa Tongarewa is to thank Warrington for its care of the Toi Moko in a special ceremony.

It is expected to be repatriated later in the year.

Though the head itself is not on display, a mask is available to view demonstrating the intricate facial tattoos - or mokos - applied to heads after death to give what the Maori consider the most sacred part of the body additional sacred powers, the museum said.

Heads were smoked and dried in the sun to preserve them.

Museum manager Janice Hayes said: "We don't know the precise origin of the head - we do know that the Maoris used to preserve severed heads for two reasons: either to venerate a loved one or to ridicule an enemy defeated in battle.

"Te Papa Tongarewa has been asking for all such artefacts to be repatriated at their expense and Warrington Borough Council, which currently legally owns the head, has decided to return it."