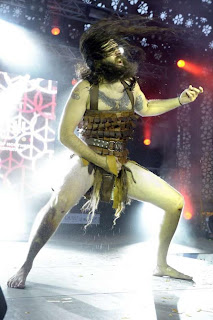 Dressed in a leather Viking outfit, he narrowly beat his rival "Aristotle", or Matt Burns from New York.

Dutchman Theun de Jong finished third in the competition, which has been held in the Finnish city of Oulu since 1996.

Justin Howard reportedly gave an "energetic" performance, sliding across the stage bare-legged, and won with a total of 34.6 points to Burns' 34.4.

They are marked on their technical prowess and stage presence, with competitors jumping, sliding and crowd diving to impress the judges.