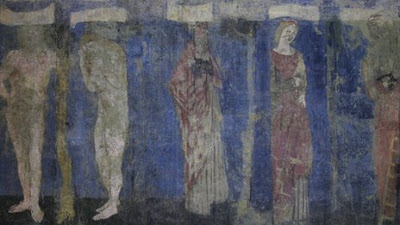 Conservation work at the former home of designer William Morris in south-east London has uncovered a mural in which some of Britain's most important pre-Raphaelite artists may have had a hand.

The mural was designed for what was the bedroom of Morris and his wife Jane.

It depicts five biblical figures and had been concealed behind a cupboard.

The mural shows Adam and Eve depicted with a serpent, Noah holding a miniature ark and Rachel and Jacob with a ladder.

"Our initial thoughts are that the figure of Jacob was by Morris, Rachel possibly by Elizabeth Siddal [and] Noah by Madox Brown," said Jan Marsh, president of the William Morris Society.

Red House, owned by the National Trust since 2003, was commissioned by Morris and designed by Philip Webb, a fellow founder of the 19th Century arts and crafts movement.

Morris lived in the house with Jane for five years from 1859, decorating it in a medieval style with bright colours and strong patterns.

It took a team of conservation specialists two months to remove the layers of wallpaper hiding the painting from view.

House manager James Breslin said it had been "so exciting" to uncover "such a remarkable example of this early decoration".