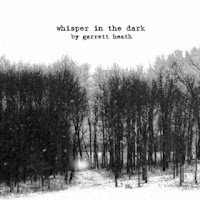 “Whisper In The Dark” is singer-songwriter Garrett Heath’s third album release since 2009 - though it’s the first with international distribution, which makes it much easier to find. It’s a literate, understated collection, and after living with it for a week or so, I’ll be keeping a keen look out for his earlier records.

The Pennsylvania native lives in a cabin with his family, out in the wilds of his home state, and he records his music in a home studio built in a converted wood shed. The easy, rootsy nature of both Heath’s approach to recording and his lifestyle as a whole is reflected in a collection of songs that are never less than warm and wholly inviting.

Heath’s sound and style feels rooted in the folk music and singer-songwriter fare of the ‘60s and early ‘70s, and that owes a great deal to his themes of love and loss, which are, of course, timeless. He backs them with a well-rounded production and a range of instruments, including guitar, harmonica and a relaxed rhythm section.

Beginning with “I Still Believe”, a slow-build love song with a simple message at its heart and a chorus that burrows deep. It’s followed by the jauntier “Don't You Worry”, and listeners of a certain vintage will be reminded of Jackson C. Frank and John Prine’s wonderful early records – which is obviously no bad thing. The atmospheric “Sorrows and Pain” might be the pick of the bunch, where distressed strings and Heath’s sorrow-drenched delivery underpin its hard-luck narrative and general air of desperation. Great stuff!
www.garrettheathmusic.com
www.reverbnation.com/garrettheath
Garrett Heath's CD Baby Page
Phil S.