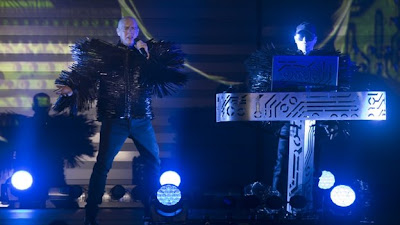 Pet Shop Boys are to headline Edinburgh's Hogmanay Concert in the Gardens, organisers have announced.

The pop duo, who have been having hit records since 1985, will bring in the New Year with a performance in West Princes Street Gardens.

The concert is part of the Hogmanay celebrations, which also include the world famous street party.

Pet Shop Boys had been due to play at Hogmanay in 2006-7 but the events were cancelled due to poor weather.

Neil Tennant, the group's singer, said "We are delighted to bring this show to Scotland on New Year's Eve.

"We've always felt we've had some unfinished Hogmanay business in Edinburgh after the weather put a stop to the planned 2006 show and this is going to be a fantastic way to see in the New Year."

Along with partner Chris Lowe, Tennant has sold more than 50 million records worldwide, making them the most successful duo in UK music history.

The other acts which will be part of the Concert in the Gardens will be announced later.

The concert is separate to the Street Party, another ticketed event which about 80,000 people will attend on nearby Princes Street and the surrounding area of the city centre.

Pete Irvine, artistic director of Edinburgh's Hogmanay, said "The Pet Shop Boys are on top of the world at the moment, and with Edinburgh's Hogmanay being the only UK appearance of their spectacular new show, they are the perfect band to help us celebrate our 21st anniversary at the very cusp of Scotland's most eventful year."

Tickets for the Concert in the Gardens go on sale on Friday 30 August.