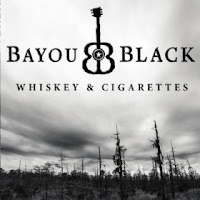 A couple of years ago we reviewed Bayou Black’s debut EP “Strangled Up In Vines”, and we were very much taken with the band’s melodic prowess and their gritty way with a hook. Since we last touched base with the Austin, Texas band, they’ve had more than their fair share of drama. Guitarist Tony Kountoupis underwent neck and spinal surgery midway though the EP’s recording process, and drummer Jeff Brickley moved out to California, and doesn’t appear on the new songs at all.

Released in June, “Whiskey & Cigarettes” is their new four-track collection of original material, and they hit their stride immediately with opening cut “Dead & Gone”. Its musical mélange of literate songwriting, a catchy chorus, and robust, rootsy guitars, brings to mind a host of much-loved artists, from Tom Petty and Marshall Crenshaw, to Iron & Wine and Jay Farrar. It’s a fine start.

They continue with “Look in Her Eye”, and it’s considerably more reflective than its predecessor, though no less appealing, and “Get Back” rolls along with an easy rhythm and uncomplicated, feel good vibe. They end with “Sorry”, where their Beatles’ influence comes to the fore, and guitars and narrative collide, creating sparks aplenty.
www.bayoublackmusic.com
www.facebook.com/Bayou-Black
Bayou Black YouTube Page
Bayou Black CD Baby Page
Phil S.