Review: Charlie and the Foxtrots – The Evergreen EP

Charlie and the Foxtrots – The Evergreen EP (Independent) 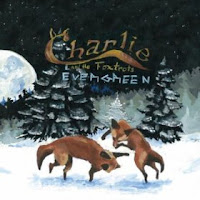 Charlie and the Foxtrots are a young six-piece band, originally conceived in a small Georgia town, and now relocated to Nashville, Tennessee. Interestingly, their musical preferences err towards folk-rock and acoustic pop rather that the corporate polished country that their new home-town specializes in, and their six-song EP places them in a much-loved tradition that begins with artists like Crosby, Stills and Nash, but is most readily identified with contemporary artists such as Bon Iver, Fleet Foxes and the Mumfords.

With six musicians playing a dozen instruments, it’s no surprise that there’s a complexity to their sound that is both rewarding and pleasing. The production is clean and wholly sympathetic, and the result is a collection that’s fresh and bright sounding, and emphasizes their talent for ambitious, accessible pop writing, while effortlessly avoiding the clichés of the form.

All six tracks are worth getting to know, and as an introduction to the band, they work beautifully. Launch track “Mademoiselle” is a doozy and vocalist Chas Wilson has a perfect voice for the song; rootsy yet urbane, with the slightest hint of fragility. “Leaving It Behind” is an upbeat floor-filler, and must surely be a live favourite, and “Thumping” adds a little twang to their sound. Best of all is “Meeting the Stone”, without sacrificing an iota of accessibility, it manages epic, progressive folk-rock in a concise 2:51.
www.charlieandthefoxtrots.com
www.facebook.com/charlieandthefoxtrots
www.charlieandthefoxtrots.bandcamp.com
Charlie And The Foxtrots CD Baby Page
Phil S.