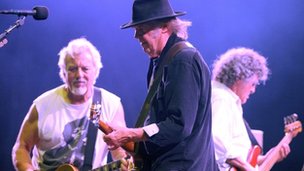 Neil Young and Crazy Horse have cancelled the remaining dates on their European tour following an accident.

The band apologised to fans, saying they were "disappointed" to have to call off their upcoming dates.

Although they gave no explanation, Rolling Stone magazine quoted sources as saying guitarist Frank Poncho Sampedro had broken his hand.

Young was due to perform two UK concerts with Crazy Horse in Liverpool and London on 18 and 19 August.

The other gigs affected are Pukkelpop festival in Belgium as well as gigs in Norway, Denmark and Germany.

A statement on Young's website said: "Due to an accident involving Crazy Horse, the remaining dates on the Neil Young and Crazy Horse tour of Europe and the British Isles have been cancelled.

"We are sorry for any inconvenience this causes to our fans or the festivals where we were scheduled to appear. As you must be, we too are disappointed at this unfortunate turn of events."

Rolling Stone reported a "source close to the Young camp" who said Sampedro, 64, had suffered "a mild fracture.

"He's expected to make a complete recovery in time for the North American tour," they added.

Sampedro, who recently had an operation on his thumb, previously told Rolling Stone that the current Crazy Horse tour could be their last.

"Our shows are physical," says Poncho. "It takes a lot of energy to play that much.

"You can't fool time. You can't count on this happening again in five years."

They last visited the UK in June to play five dates, marking Young's first UK gigs with the Crazy Horse line-up of Sampedro, Billy Talbot and Ralph Molina since 2001.

Fans with tickets to the cancelled shows have been asked to contact their point of purchase for a refund.