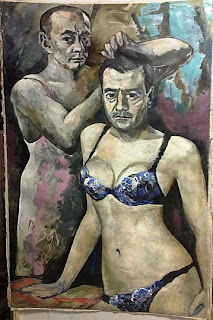 Police in Russia have seized a painting depicting the country's president Vladimir Putin in women's underwear from an art gallery in St Petersburg.

Its artist, Konstantin Altunin, has since left the country to seek asylum in France, according to the director of St Petersburg's Museum of Power.

Two of the other pictures removed from the gallery poked fun at conservative Russian politicians who led a campaign to introduce controversial anti-gay laws.

Gallery owner Aleksander Donskoi claimed he had been given no formal warrant or explanation for the removal of the paintings, which were included in Altunin's exhibition entitled Rulers.

The gallery's director, Tatiana Titova, said Altunin had fled the country following the confiscation of the paintings.

One of the pictures seized features Mr Putin in a nightgown, standing behind Mr Medvedev and stroking his hair, while the prime minister is depicted with a woman's body and wearing lingerie.

Another shows St Petersburg legislative assembly member Vitaly Milonov - one of the architects of Russia's anti-gay laws - against the background of a rainbow, the symbol of gay pride.

A fourth painting depicting the head of the Russian Orthodox Church adorned with tattoos was also confiscated from the Museum of the Authorities.

St Petersburg, which hosts the G20 summit next week, was one of the first Russian cities to introduce a law against what it terms 'gay propaganda'.