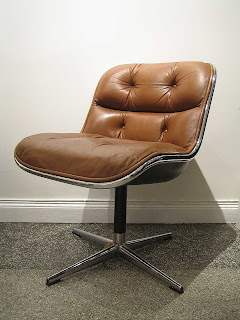 Furniture designer Charles Pollock, who designed the ubiquitous 20th Century office chair, has died in a fire at his home in New York.

The Pollock Executive Chair, which he designed for Knoll in 1963, is one of the best-selling office chairs in history.

It spawned many copies and became a visual symbol of the modern workplace.

Police are investigating the cause of the blaze at his Queens home. Pollock was 83.

Pollock's chair was exhibited in the Louvre in Paris and is still in production today.

Deyan Sudjic, director of the Design Museum in London said Charles Pollock "was the opposite of the celebrity designers of the 1980s - a kind of anti-Phillipe Starck."

"He was a man who shunned publicity and attention, and produced just a few designs for chairs - notably for Knoll in America and Castelli in Italy.

"But what he did design was beautifully considered and detailed - designs that have that elusive quality of timelessness."

Pollock spent five years developing the technology behind his executive chair, which was a new concept and production method.

His patented invention of rim technology meant the chair had very simple assembly.

In 1982, he created the award-winning Penelope Chair for the Italian company Castelli.

Pollock introduced his first new product in America since the Pollock Executive Chair in 2012. His CP Lounge chair was commissioned by Bernhardt Design.

His work is exhibited in many museums around the world.