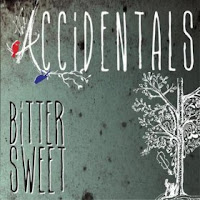 The Accidentals are Katie Larson and Savannah Buist, a Traverse City, Michigan duo who play a captivating brand of accessible, heart-on-their-sleeve alt. folk. Melody and hooks are ever-present and the teenage pair sing their songs with a quirky charm. They originally got together in late 2011; they hit it off musically almost immediately and released their acclaimed debut “Tangled Red and Blue” in 2012. “Bittersweet” is its successor and they’ve effortlessly avoided any suggestion of the dreaded “sophomore album slump” with a collection that gets under the skin and makes itself very comfortable.

Their youthful enthusiasm is utterly infectious, and they sound like they’re enjoying themselves throughout the album’s 15 tracks. They both play a variety of gizmos, from traditional folk and songwriting instruments like guitar and piano, to more exotic devices such as glockenspiel, kazoo and musical saw - together with a selection of serious strings, including violin and cello. The diversity of instrumentation adds several layers and much warmth to the recordings, and the songs flourish in their lush surroundings.

Recorded with major producers in Indianapolis and Nashville, their professionalism has helped realize Larson and Buist’s ambitious artistic vision, and delivered a wealth of standout material. They begin with “The Silence”, an upbeat arrangement propels the song onwards and upwards, and the lyrical flow is intriguing and absorbing – and so complex as to draw comparison to Joanna Newsom in full poetic flight. Then there’s the title track, which arrives fully formed with a shuffling rhythm and rich harmonies, and enthralls a little more with each listen, and “Bulletproof Glass” brings out their equally compelling acoustic-indie inclinations.
www.moreaccidentals.com
www.facebook.com/The-Accidentals
www.reverbnation.com/moreaccidentals
The Accidentals CD Baby Page
Phil S.

The Accidentals Live at the City Opera House playing Bittersweet