Bob Dylan portraits to be shown at UK gallery 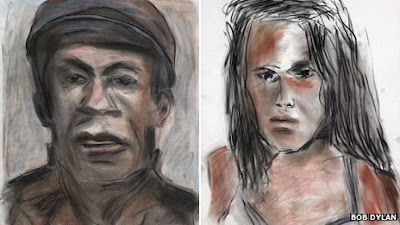 The National Portrait Gallery in London is to host the first UK exhibition of portraits by US singer Bob Dylan.

A series of 12 pastel works, a mix of real and fictitious characters, will be displayed in the museum from September.

The singer, 72, who has drawn and sketched since childhood, has only exhibited his art publicly for the past several years.

The images from Bob Dylan: Face Value have not been shown anywhere before.

The director of the National Portrait Gallery, Sandy Nairne, added: "Bob Dylan is one of the most influential cultural figures of our time. He has always created a highly visual world either with his words or music, or in paints and pastels."

In 2008, The Halcyon Gallery in London featured Dylan's drawings and sketches from periods on the road between 1989 and 1992.

In June, the veteran singer was nominated for France's top distinction, the Legion d'Honneur.

He was also made an honorary member of the American Academy of Arts and Letters.