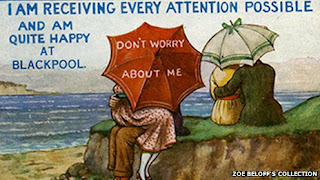 Psychoanalyst Sigmund Freud's love of Blackpool has inspired an art exhibition in the seaside resort.

Artist Zoe Beloff launched the Dreamland exhibition in Coney Island, USA in 2009 to mark the centenary of Freud's visit to the fairground.

New work, called the Blackpool Chapter, is on show at the Grundy Art Gallery, featuring a fictional Freud society's trip to a funfair.

She said the Freud-inspired funfair exhibition was "entertaining, colourful and loud".

"I love Blackpool and Coney Island where people go to have fun and be creative.

"I see Blackpool as a people's playground and I imagine that is how Freud would have seen it when he came here," said the Edinburgh born artist.

Richard Parry, curator at Blackpool's Grundy Art Gallery, said: "The exhibition engages the heritage of Blackpool, Freud and funfairs with a great deal of imagination, wit and humour."

Mr Parry said many people would be surprised by Freud's affinity with the area. "His love for the resort is not widely known but he clearly had an affection for Blackpool," he said.

Freud first visited the Fylde coast in 1875, during a visit to see his half-brothers in Manchester and in 1908, in a letter to his family, he told them how much he enjoyed the area.