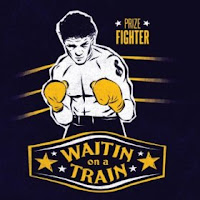 The fourth album from the Pennsylvania trio Waitin On A Train (or Tony, Bert and Paul, if you prefer) continues their exploration of a genre they’ve helpfully named “Pennsylvania Urban Hillbilly Music”. In essence it’s a combination of Appalachian mountain music, bluegrass, old country and string band styles, and with its mix of original and traditional tunes, it sounds almost timeless; apart from a splash of punk rock attitude, it could’ve been recorded at any point during the last 70-odd years.

On the opening track “One and Done” they’re joined by one of their Pennsylvania neighbours, celebrated bluegrass banjoist Chris Warner (Jimmy Martin, Del McCoury, Seldom Scene, etc.) who adds a powerful instrumental prowess to a first-rate drinking song, hidden amongst a plethora of humorous clichés. For the remaining 15 tracks they play a mix of upbeat instrumentals – “Texas Tumbleweed” is particularly lively – and some gritty story songs, such as “Elmo Nokes” (the suspected perpetrator of the “babes in the woods” murders), the lonely desperation of “Prison Dream” and the excellent title track.

There’s nothing smooth or over-produced about “Prize Fighter” which lends the group a much-deserved authenticity. Live on stage, I imagine they’re unstoppable, and it’s to their credit that they transfer their vim and vibrancy so effortlessly to a studio setting. I hope they find their way to the UK soon.
www.reverbnation.com/waitinonatrain
Waitin On A Train CD Baby Page
Phil S.