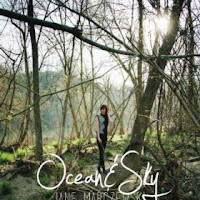 Originally from Zanesville, Ohio, and now resident in Lynchburg, Virginia, Jane Marczewski is an up and coming singer-songwriter, blessed with a voice which is simultaneously ancient, timeless and utterly contemporary. It appears to inhabit a place where Joanna Newsom, Sara Carter and Gillian Welch meet, and makes a striking impression instantly, before songs and arrangements can take hold.

Her sophomore release, the “Ocean & Sky” EP is a pristine six-track collection of indie-folk-pop songs, with more than their fair share of tingly, hair-on-the-back-of-the-neck moments. The first of them arrives at the beginning of opening track “River” when we hear Marczewski's voice for the first time. Set in an arrangement of subtle indie dynamics and folk strings, the song’s themes of exploration and discovery are emphasized by imagery taken from its title and a hook that burrows deep.

“I Think Ill Go” seems an altogether more straightforward outing, yet it’s just as likeable; there’s plenty of depth to the words, and Marczewski’s voice, high in the mix, is juxtaposed against powerfully simple acoustic guitars and just a hint of jangle. When the pace slows on the piano based “Our Time” and the delightful “Wishing Well” we get to hear her gentler, more reflective side, and there’s a poignancy present that’s utterly beguiling.
www.facebook.com/JaneMarczewskiMusic
www.reverbnation.com/janemarczewskimusic
Jane Marczewski CD Baby Page
Phil S.