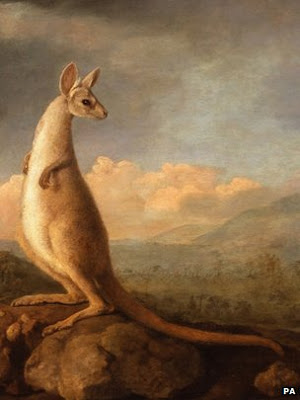 The National Gallery of Australia has insisted it has a greater claim to two 18th Century paintings by George Stubbs of a dingo and a kangaroo than a UK museum seeking funds to buy them.

The oil paintings were "central" to the history of Australian art, said the gallery's director Dr Ron Radford.

The works are subject to an export bar that prevents them leaving the UK.

Earlier this week, the National Maritime Museum in London launched an appeal to "save" them for the nation.

Their campaign is supported by naturalist Sir David Attenborough, who said he had "no doubt" the works should be placed within the museum's collection of paintings made on Captain Cook's Pacific voyages.

According to the Australian gallery, however, the fact that they were painted after Cook's death meant they had a "less prominent" place in the British navigator's "story".

The Kongouro from New Holland (The Kangaroo) and Portrait of a Large Dog (The Dingo) were first shown at London's Royal Academy in 1773. 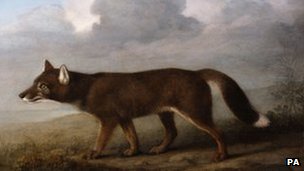 The paintings, which Stubbs based on spoken accounts, were notable for bringing the existence of the animals to the attention of the British public for the first time.

According to Dr Radford, however, "the case presented by the National Maritime Museum... is very tenuous".

The claim that the marsupial paintings "should be 'saved' from being displayed in the national art collection of the very country from which the animals originate" was "not a strong argument," the gallery director continued.

The Department for Culture, Media and Sport placed a temporary export bar on the paintings earlier this year after they were bought by an unnamed party from outside the UK.

The DCMS recommended the paintings should not leave the country because they were "so closely connected with our history and national life" and were of "outstanding significance for the history of exploration, science [and] natural history".

The National Maritime Museum is seeking to raise £1.5 million of public donations to buy and restore the paintings, which have not left the UK since 1773.

In a statement released on Thursday, the National Gallery of Australia said it had been "actively" seeking to acquire the works since its official opening in 1982.

A spokesman for the DCMS declined to confirm that the application for an export licence had been lodged by the Canberra-based institution.