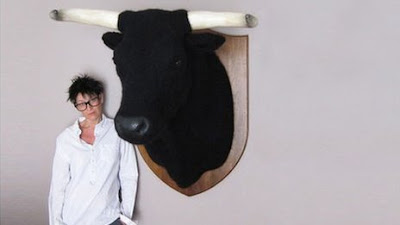 An empty shop has been turned into an art installation featuring crocheted animals designed to mimic taxidermy.

It is the work of artist Shauna Richardson, who created the world's largest single-handed crochet sculpture as part of the 2012 Cultural Olympiad.

People can view the "crochetdermy" through the window of 33 Cank Street in Leicester city centre.

Richardson, who lives in Leicester, said she wanted to bring her art "out of the gallery".

"It is a Victorian diorama full of crochetdermy pieces and has been designed to be viewed from the outside," she said.

"The result is a round-the-clock opportunity to surprise unsuspecting passers-by; a curio to bring a little something extra into everyday Leicester life."

The installation, called 33 Cank Street, will be in the premises until 30 October. 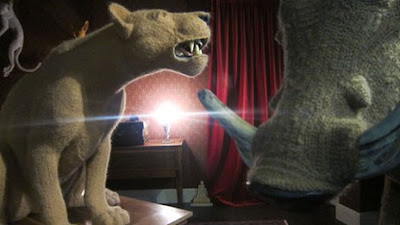 Richardson previously spent two years crocheting three giant lions out of 36 miles of wool, as part of the 2012 Cultural Olympiad.

The lions travelled across the East Midlands and to London in an illuminated glass case, harking back to the days of the travelling menagerie show.

Her latest work makes use of a period building in Leicester which would have been unused.

Leicester City Council hopes that landlords of other empty premises will allow them to be used temporarily in similar ways.

City mayor Peter Soulsby said: "As we bid to become UK City of Culture in 2017, this project is an example of how we are working to bring culture to the streets of Leicester and make art accessible to all."

Shauna Richardson studied fine art at De Montfort University, Leicester.
She invented crochetdermy and has been making it for about six years.
"Crochetdermy came about as a result of studying art theory and making work that challenges ideas," she said.
"The pieces I make are realistic, they are made out of crochet yet look like the real animal and are presented as taxidermy specimens. Crochet + taxidermy = Crochetdermy."