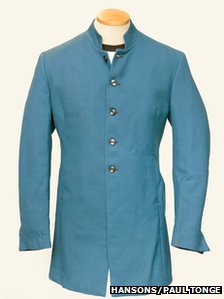 A jacket which once belonged to John Lennon has been bought by a fan for £7,000 at an auction.

The teal blue Nehru jacket, later owned by Jo Jo Johns, a PA for the Beatles, was auctioned in Derbyshire.

Ms Johns had to clear Lennon's house when he moved to the US in 1971 and later gave the jacket to her friend Tony Goddard as a birthday present.

For 25 years, Mr Goddard has had the jacket on display at his Leicestershire home but said it was time to sell it.

"The jacket was given to me at one of my birthday parties in the early 70s," said Mr Goddard.

"Jo Jo was a good friend and she had acquired a lot of abandoned belongings from the band members."

The three-quarter length jacket, with a mandarin collar and slightly flared sleeves, shows some small signs of wear.

"There is no doubt, in my mind, that this jacket was well worn by John in the late 1960s," said Charles Hanson, manager of Hansons Auctioneers in Etwall.

The new owner of the jacket, who did not want to be named, said she was absolutely delighted with her purchase and said she would add it to her extensive Beatles memorabilia collection at her home in Derbyshire.

Junior valuer Elizabeth Bailey said when the jacket was brought along to a valuation evening earlier in the year, "the whole room dropped into a stunned silence" when the vendor explained the item's history.