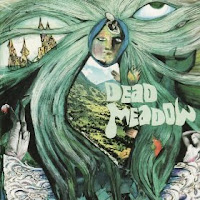 This re-issue of Dead Meadow’s eponymous debut is the first in a reissue schedule from New York label, Xemu Records. Having been originally released in 2000, the album has been remixed, from the original tapes, by Tom Gloady (Willie Nelson, Ryan Adams) and remastered, at Sterling Sound, by Greg Calbi (John Lennon, Bob Dylan, The Allman Brothers, New York Dolls and more). For those that have not encountered the band in the past 13 years, this is a great place to start. What you get is the foundations of the stoner-blues-noise-rock sound that the band have explored and expanded upon ever since.

The Washington DC (now Los Angeles) trio employ the archetypal rock model of vocals / guitar (Jason Simon), bass (Steve Kille) and drums (Mark Laughlin). They and take a leaf or two from the books of Cream, Led Zep, Deep Purple, Stooges, grunge and punk, as well as folk rock and psychedelia, and the band were amongst the first wave (or precursors) to the stream of bands mining this seam through the noughties. Around the mighty grooves, creative lyrics are spun from childhood memories, hallucinations, and pagan fantasy and witchcraft (apparently inspired by the likes of H.P. Lovecraft).

What is refreshing is that the vocals are not made to battle by screaming for their place amidst the power; instead the vocal is lifted in the mix so their nasal melodies narrate clearly. Although there’s not a bad track on the album, there are a few highlights worth mentioning, for example, the weepy delay and intoxicated lilt of “Dragonfly” and the acoustic strains of “At The Edge of The Wood”. And not forgetting the opening track “Sleepy Silver Door”, which after almost a minute of fractious stoner guitar riffing, which sounds like it could break at any moment, the lead becomes the single note that accompanies the verses, and heads into the overdriven, over fuzzed breakouts.

The inclusion of an extra (not so well) “hidden” track – a 2-minute instrumental studio outtake that sounds like it was faded out minutes before it ended – was quite pointless.
www.deadmeadow.com
www.xemu.com
Willsk