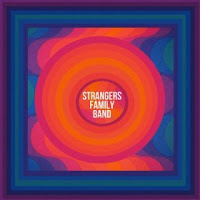 Lead track, “Yaer Time”, set to a fuzzy jangly riff, is a lethargic and fear fuelled deal and to be fair their Pink Floyd laced catch line, “hello, is there anybody out there” outstays its welcome in the drawn out ending - which is a shame. There’s a major preoccupation with elevation running throughout the record, tied in to themes of space travel (“Starship to the Sun”, “Cosmic Wine”) or drugs (the punny “Elle S Dee” - whose sitar adds eastern promise - and “Mary Jane”).

They save the best until last with “Jenny 3003”, expanding from a Syd Barrett-esque frail and naive intro, to include alien abduction and sun-kissed Tropicalia, before returning to the cosmos and kicking into an echo drenched space-stoner groove.

Keeping to a vinyl LP’s length restriction, this is a brief and enjoyable ride, and if like me you’re a sucker for ‘60s psych, you’ll dig it.
www.strangersfamilyband.com
www.xemu.com
Willsk