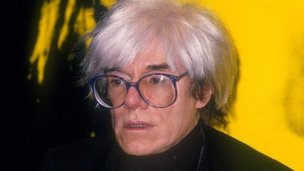 The museum dedicated to Andy Warhol is broadcasting a live webcam feed from his grave in Pittsburgh, US, to mark what would have been the artist's 85th birthday.

The project is entitled Figment because the artist said he would like the word inscribed on his gravestone, the Warhol Museum, also in Pittsburgh, said.

Warhol, who died in 1987, became famous for his iconic pop-art images.

The video project went live at midnight on Monday.

Warhol's 85th birthday would have been on Tuesday.

His gravestone, in a graveyard in suburban Pittsburgh, has Warhol's original surname, Warhola, the dates of his birth and death and a cross.

Museum director Eric Shiner said the museum decided to call the project Figment because of a Warhol quote, in which the artist said: "I always thought I'd like my own tombstone to be blank. No epitaph and no name. Well, actually, I'd like it to say 'Figment'."

Mr Shiner said the museum decided that the gravesite webcam "would be a really fantastic way to put Andy on the air 24/7 and plug in to our global audience".

"We believe that this will give Warhol the pleasure of knowing that he is still plugged in and turned on over 25 years after his death,'' he added.

EarthCam, which is running the webcam network project in conjunction with the museum, said it will also have a live video broadcast from the church where Warhol was baptised and people will be able to send flowers and watch as they are delivered to the grave.

Warhol, who is buried near his parents at the St John the Baptist Byzantine Catholic Cemetery, was a devout Catholic who went to church every day to pray, said Shiner.

His gravesite is visited by hundreds of people each year, with many leaving items featured in his pop culture artworks, such as Campbell's Soup cans and Coca-Cola bottles.

Warhol, who was also a film-maker, once said he preferred making films rather than paintings because they were "easier".

His eight-hour film depicting night falling on the Empire State Building consisted of a single stationary shot of the New York landmark.

Roehrig is filming people who visit the grave and photographs the many objects fans leave there.