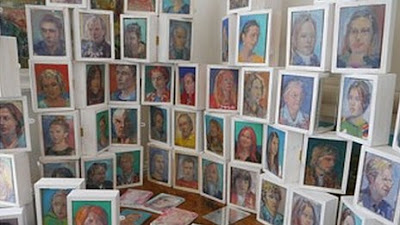 An artist is attempting to paint a portrait of every resident living in his home city.

Grahame Hurd-Wood has already painted 112 of the 1,800 people in St Davids, Pembrokeshire, the smallest city in Britain.

The 55-year-old believes he can complete the rest in about five years by doing one portrait a day.

He hopes to exhibit all of the paintings in the city once he has a complete collection.

"I started doing the portraits about 14 years ago and the original concept was to paint a few people and create one large image," said Mr Hurd-Wood, who has lived in St Davids since 1984.

"I have got up to 112 and I know if I can do that I can do the population of St Davids.

"It's doable - it will take a few years if I can be quite productive about it.

"I reckon I could probably do one a day or within five years but it depends on how people respond to the idea."

Mr Hurd-Wood said the small portraits can take anything from 30 minutes up to five hours and the general reaction is "positive".

"It's both me asking people and then asking me to do a portrait," he added.

"I feel quite nervous initially doing the portraits but the people are intrigued and like to see themselves painted."

Originally from Gosport, Hampshire, Mr Hurd-Wood grew up in Derry, Northern Ireland, and came to St Davids initially for a year in 1984 but decided to stay.

"I just feel it's my home now and it's something I would like to paint about.

"When I have completed the portraits, I want to initially have an exhibition in St Davids and then get it to further afield as it's a massive piece of work."