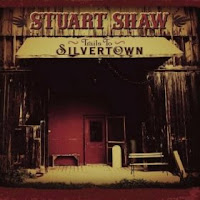 Stuart Shaw describes what he does as “all Americana Dustbowl Rock and Roll” – which, listening to the evidence presented on his new record “Trails To Silvertown” is right on the money. He’s recorded previous records in Nashville and Memphis, but he returned to his home state of Michigan for “Trails To Silvertown” and, with his band The Val­ley Run­ners providing support, Shaw has shaped a collection that’s gritty and dark, yet always accessible and welcoming.

The ‘Silvertown” of the title is a Utopian dream, a place to live, built on love and respect, a place where we all want to live. Though, as the title suggests, it’s a collection of songs about the journey there rather than the place itself, and these aren’t easy roads. Songs such as “Bury Me Down”, “Black Heart” and “There Aint No Grave” expose shadows and doubt, and on the latter, Shaw reaches deep inside for a performance that demands a emotional response that’s similar to hearing an early Johnny Dowd album, or Johnny Cash’s “American” recordings for the first time.

Other highlights include “Down On This Land” and the haunting, Morricone-esque “Waitin On the Train”, though if you’re inclined towards literate American songwriting, Springsteen’s “Nebraska” and “Tom Joad” albums, or any of Dylan’s albums from “Time Out Of Mind” onwards, you’ll find much on “Trails To Silvertown” to enjoy.
www.stuart-shaw.com
www.reverbnation.com/stuartshaw
Stuart Shaw CD Baby Page
Phil S.